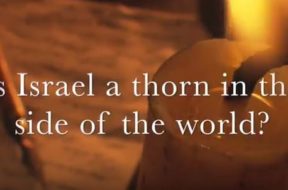 VIDEO: Moments that Matter – Is Israel a Thorn in the Side of the World?

The Old Testament serves as a factual and archeological source for tracing Israel's past and how they developed as a nation. The 12 sons of Jacob (whose name was changed to Israel) were the beginnings of the nation and they moved into the land that would also bear that same name. Why are there so many questions about and issues with this tiny nation? Are they really occupying land that is not theirs? Is Israel really mean and over-the-top harsh with their neighbors, or are there important details about the constant conflicts that we are always missing? Watch this short vlog then listen to the full podcast of the same name. Should Israel Belong to the Palestinians?

It is no secret that the Middle East is a hotbed of trouble and confusion in today’s world. How did this all come to be? Is the nation of Israel God’s chosen people and if so, does that mean that they are above the rules that the rest of us must follow? Are there consequences for being God’s chosen? Does Israel have divine rights to their land? Stay with us as we look into Israel, her Biblically bumpy path towards God and then her 20th and 21st century path towards God.

Middle East Meltdown – The Beginning of the End?

Should it be Israel or Palestine?

Our world is full of controversy. There are controversies over politics, equal rights, taxation, economic principles, global warming and the right to life, to name a few. Amongst the most noted and longest lasting controversies of our day is the controversy over Israelies, the Palestinians, and the land that they both live on. Think about it – in an oil rich region where there are over 220 million Arabs residing, one of the greatest world-wide attention getters is the tiny sliver of land called Israel – a land of NO oil to speak of, 6 million Jews and about 1 million Arabs. Swirling around this tiny land that is about the size of New Jersey are questions about who has a right to claim the land as their own and who doesn’t. Stay with us as we look into this question from a biblical, historical and present day perspective. Should it be Israel or Palestine?