What Does God Want From Me?

If you ever want to go somewhere, it’s usually a good idea to know where you are going and what the path is to get there. The destination of pleasing and serving God is no exception. The problem is, that there are so many interpretations as to what direction to go and what to take along with you, that the average person asking the question, “What does God want from me?” will be overwhelmed by the variety of answers. So, “What does God want from me?” Stay with us and find out!

How Do You Live With Gratitude?

Last week we talked about hope and its critical role in living a life of value. Hope seems to be the forgotten middle brother of faith and love. In the same way, this past Thursday we celebrated the forgotten middle brother of holidays – Thanksgiving. How do you compete with the costumes and candy of Halloween just a few weeks before and the gifts and glitter of Christmas a month later? So, what about the art of thanksgiving? How can we master the “attitude of gratitude” and live a transformed life? How does the Christian fight against Satan? What are we armed with? What makes us think a battle against such an enemy can be won? Put on the armor of God!

What Can We Learn From Peter? (Part III)

On this past May 20th we embarked on a journey through the Apostle Peter’s life and on June 10th, we continued that journey. Our ending point was his conversation with our Lord after Jesus’ resurrection – the conversation that let Peter know that Jesus was counting on him as a lynch pin of what would become Christianity, in spite of Peter’s shortcomings. Today, we look at some of Peter’s experiences that followed, from Pentecost to the conversion of the first Gentile to the writing of Peter’s epistles. Stay with us as we look at how God’s Spirit influenced Peter in his mistakes, his impetuousness and his courage. Where Do You Find True Happiness?

It has been 2,000 years since Jesus walked the earth with the good tidings of the Gospel. When he finished his work, he left the infant religion of Christianity in the faithful hands of the twelve Apostles. These men “prospered and grew” Christianity. So 2,000 years later, in a world that is mostly non-Christian and largely secular, is the work of the Gospel still “prospering and growing?" Are we now achieving what our Lord Jesus set out for us to do? Stay with us as we look at the cold hard facts of Christianity in the world today. What Can We Learn From Peter? (Part II)

A few weeks ago on May 20th, we discussed Part 1 of our conversation about the Apostle Peter. We covered his life from his being introduced in the Scriptures as a typical fisherman from Galilee, up to his proclamation that Jesus was the Messiah and his angst at Jesus saying that he, Jesus, would have to die. These three things typify the life of Peter: a regular guy of no singular background, impetuous – willing to speak up when others would not, and often getting into some kind of trouble for things he said or did. Stay with us as we look further into this utterly fascinating life of a man who would become one of Christianity's greatest leaders. What Can We Learn From Peter? (Part I)

(Part 1 of a 3-part series) Of all the Apostles, Peter is the one who is most exposed to us. His background is clear, his strengths and weaknesses are obvious, and his faults are plain. It is through the viewing of his life that so many of us find hope – for we see in the Apostle Peter a simple man, who with great faith met with countless adversities and by God’s grace was not only forgiven for his failings, but was one of the twelve foundation pillars of the true church. Stay with us as we begin to tell the story of Peter – the man – the disciple – the leader. 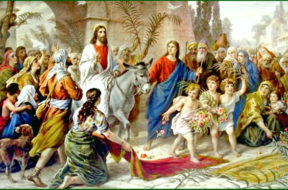 What’s So Special About Palm Sunday?

The events of the Sunday before Jesus’ crucifixion were monumental. They not only began the culminating process for the greatest human life ever lived, they also retold the story of the ancient Passover and gave it a world-wide meaning. Stay with us as we look into all of the pieces of the Passover, Palm Sunday and the road Jesus walked to sacrifice his own life for our deliverance. Born in a Stable and He Changed the World!

Christmas is here! It is the time for celebration and food and decoration and gifts and parties and time off from work and football and TV specials and Christmas songs and holiday cheer and holly and mistletoe and shopping and spending money and Santa Claus and elves and snow!!! Whew! By the way, if you can put all of that aside, it is really the time for deep heartfelt thankfulness, for it is the time that we give honor to the birth of the most important, most courageous, most loving, most wise and most humble man to have ever lived. The man Christ Jesus – our savior and Lord! Stay with us for a VERY SPECIAL two hours of praise and thanks!